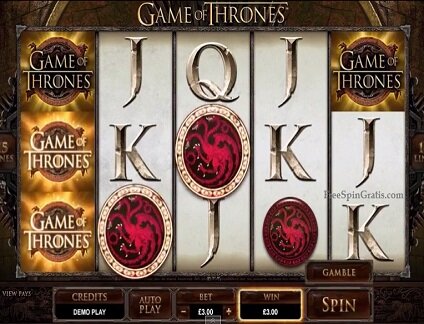 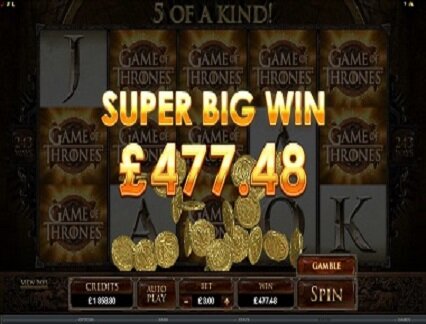 If you consider yourself the ultimate Game of Thrones fan then Microgaming has created a game with just you in mind, their all new Game of Thrones online pokie. Join house Baratheon, Lannister, Targaryen and Stark as they battle endlessly in their quest to crown their families as the leaders of Westeros.

As can be expected, the theme employed by this game is rather grim, very much like the series, only with less blood and nudity. Microgaming has developed some of the best pokie games available today so when branding one of their games with arguably the most popular series currently on television, expectations will be high, very high. Microgaming has made a habit of linking big names to their games as can be seen with their music series which depicts legends such as Motorhead, Guns N’ Roses and Jimi Hendrix and they are yet to disappoint.

Get your $1600 bonus
Play now for real money

Oh yes, Winter is definitely coming, at least that’s what the dark look of this game makes you believe. Obviously when we see Game of Thrones, no one expected daisies and rainbow unicorns, so the gloomy setting is not a surprise although I suspect it can get rather old after long periods of play. When starting the game you’ll be treated to a short intro, featuring some key clips from the television series, more of which can be found as the game progresses. The iconic Game of Thrones theme song, A Song of Fire and Ice, has been chosen as the soundtrack although you do get access to the extended version which has a little more variety.

Microgaming has developed another great 5 reel game here but offer you a deviation from the start that’s unfamiliar in pokie games. When loading the game you have the option to choose between 15 pay lines or Microgaming’s famous “243 ways to win”. Whichever you select, be sure that you’ll have ample opportunity to increase your treasury. Bets range from 0.15 to 3 coins which doesn’t provide a large variation but with the bonus games you’ll receive up to 5x multiplier which will keep things very interesting.

You’ll see 4 unique house symbols in this game, each utilizing a code of arms from one of the 4 main houses listed below.

Game of Thrones Pokie offer you a multitude of free spins and multipliers depending on where your allegiances lie. Choose the right house to serve and you could win a jackpot amount of $121 000 with the right combination of bonuses, your fortune is in your hands.

A Lannister Always Pays His Debts

And indeed they will have the chance to do so. Should you find 2 or more scatter symbols anywhere on the reels you’ll be presented with 4 banners that represent the 4 houses. You’ll be asked to choose the house you wish to serve as each comes with their own set of advantages.

Additionally you can also unlock the Gamble feature which will find you travelling through the kingdom of Westeros. Along the road to riches you’ll come across well known aspects of the show like the 3 eyed raven, the white walkers, dire wolves and dragons. At each stop you’ll be presented with a winning value and given a Braavosi coin to flip. Predict the outcome of the coin flip correctly and you’ll win the amount shown.

Microgaming has done well with this adaptation of the extremely popular series. The theme and music do well to convey all that Game of Thrones embody and the symbols representing the houses are well designed to showcase what the families stand for. Fans of the series will find plenty to enjoy here and the bonus game selection will have some fans reconsider their loyalties. However, the Game of Thrones pokie game offers enough variety that even those who’ve never seen the show will still find plenty to enjoy with the mix of free spins and multipliers available in the bonus game. Unfortunately if you are not familiar with the show, you’ll probably find the theme and soundtrack rather gloomy and won’t appreciate the occasional clips taken from the show which diehard fans will see as one of the best features of the game.