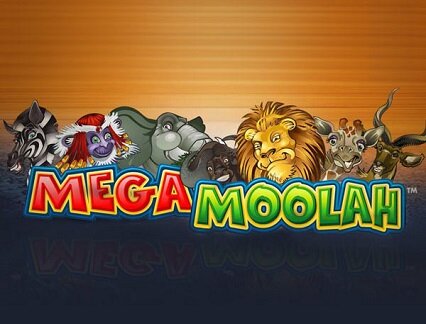 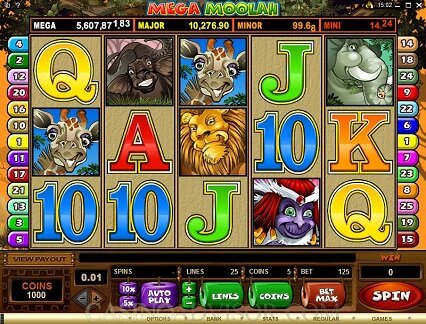 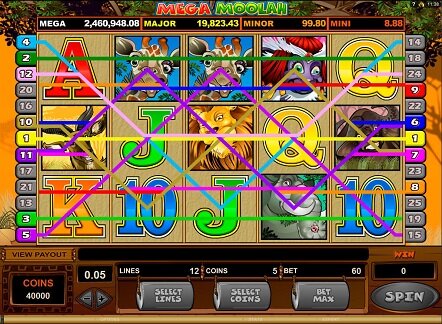 Mega Moolah is the most famous pokie game in the world, which achieved glory by changing the lives of many players, who were lucky enough to win the ultimate Mega Jackpot award. Until now 27 lucky players were awarded with multi million amounts of money while spinning the reels on Mega Moolah, the latest being Rawiri Pou from New Zealand, who won an amazing NZ$10,144,395.82 on the 17th of June,2016. At first sight Mega Moolah doesn’t seem like a pokie game that has a lot to offer. The game theme comes from the African savannah, with wild animals as the main game symbols. The game play is fast and simple, while the visual effects are on a low level.
This is mostly due to the fact that Mega Moolah is an older Microgaming video slot, which launched in 2006. Still what it lacks in appearance, Mega Moolah certainly compensates in payouts. It’s a Mega Progressive Jackpot game, part of the Microgaming Jackpots network, where the Mega Jackpot amount is pooled over the entire Microgaming platform.

Get your $1600 bonus
Play now for real money

In general Mega Moolah is a very simple video slot game to play. It has a standard design for older video slot games with 25 active pay lines, 5 reels and 3 rows in total. The number of active pay lines per spin can be altered, but playing with all 25 pay lines active is recommended, as the chances to win are bigger. Players can choose to place bets on Mega Moolah anywhere from the minimum $0.25 up to the maximum $6.25 per spin. The total bet size is adjusted by increasing or decreasing the coin size from $0.01, $0.02 up to $0.05 and by adjusting the coin per bet line number, from 1 to 5.

Mega Moolah has a vintage design, common to older Microgaming slots and low level visual effects. The game play will take you on a journey through the African Savannah, meeting the local wildlife on the way. Each spin of the reels will bring to life the sounds of the African plains, while the scatter payouts will bring out the drums, calling for the rain to come.

Mega Moolah is most famous by the attractive Jackpot awards offered to online casino players. There are four Jackpots in total: Mini, Minor, Major and Mega, each of them starting with a matching payout of $10, $100, $10,000 and $1,000,000. The feature is randomly triggered and the player is taken to a separate Wheel of Fortune bonus game.
Each of the Jackpots available has a corresponding symbol on the Wheel of Fortune, so once the player spins the wheel, depending on which symbols lands, the corresponding Jackpot is awarded.

The Jackpot awards on Mega Moolah are triggered and won on a daily basis, but this is true for the 3 smaller Jackpots, while the biggest Mega Jackpot is paid out rarely. The biggest amount that was ever won on Mega Moolah, is an astonishing £13.2million or around €17million. What’s amazing in this Mega payout, beside the value of the jackpot awarded, is the fact that it was paid while playing on the minimum $0.25 per spin. This is one of the main reasons why Mega Moolah is a common choice pokie game, for both low and high roller players.

Even though each online casino player, that sets out to try his luck on the reels of Mega Moolah, most certainly dreams of landing the Mega Jackpot award, many players try the game for real play, also because of the bonus features it offers and the decent base game payout potential it has.
Mega Moolah offers players to win up to 15 free spins, each time 3, 4 or 5 scatter symbols land anywhere on the reels. The free spins bonus is played on a decent x 3 multiplier and can be re-triggered by landing another set of 3 or more scatters on the reels.

What’s great about the bonus feature in Mega Moolah, are the big payouts that can land. This is mostly due to the chance for several re-triggers to occur, awarding a big number of free spins, but also due to the doubling function the Wild Lion has. Thanks to this, small but important detail, all wins in the free spins bonus, with a Wild substituting will have a great x 6 multiplier attached, instead of the standard x3.