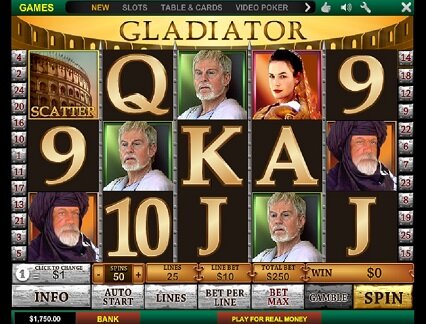 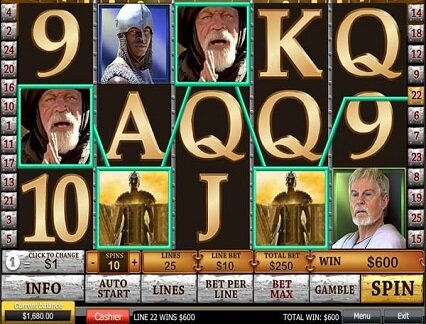 Gladiator. The 2000 film by Ridley Scott, world famous and award winning. Naturally such a famous movie was adapted into the original Gladiator Pokie, created by PlayTech. This version is exactly the same as the original with the only difference being the addition of a progressive jackpot up for grabs. The slot depicts the move through its design and use of movie characters and move scenes. Players can enjoy wilds, scatters, decent bonuses and some good wins available in conjunction with the thrill of playing for a potential jackpot prize. Fans of the move will enjoy the way the theme is executed, while players who have never seen the movie…because they live under a rock…will enjoy the theme for its own sake.

Get your $400 bonus
Play now for real money

The game aims to bring the feel and atmosphere of the move to the player. The colour scheme seems to have been kept very neutral and understated to place the focus on the symbols of the characters. The usual high card values with their adaptation to fit the theme are accompanied by images of the characters from the movie. Unfortunately the face of the main character, the great Maximus Decimus Meridius is not visible but his representation, a shadowy gladiator ready for battle, serves the purpose all the same. The other characters include Commodus, Lucilla, Gracchus, Proximo and Juba. There is also the symbol of a coliseum and the symbol of a helmet. Their images move around when used in a winning combination but overall the visuals are not spectacular when compared to many of the game son offer now days. The audio particularly is nothing to write home about and most players prefer muting it all together.

Reeling it in: Multipliers on offer

The Gladiator Jackpot Pokie game has 5 reels, 3 rows and 25 pay lines. The symbol of the gladiator himself acts as the wild symbol. He will substitute for the other symbols, save the scatter, and help to complete winning combinations to bring in the cash. The symbol of the coliseum acts as the scatter, triggering the scatter bonuses.  Landing three or more scatters triggers the free spin bonus game where the real winning potential is hidden. The coin sizes range from 0.01 to 1 while the pay per line ranges from 1 to 10.

The stand out feature of the Gladiator Jackpot pokie is the possibility of winning the huge progressive jackpot. The largest recorded jackpot win was over 2 million! An absolutely life changing potential win. The jackpot can be won in the Jackpot bonus. This bonus is triggered by landing a wild symbol on reels 2, 3 and 4 at the same time. In this bonus the player is granted a pick of 9 helmets of either gold silver or bronze. The helmets provide a cash prize and the jackpot is won by picking 9 gold helmets. Even an emperor would be impressed by the jackpot potential.

A Gladiators special: Lots of bonuses on offer.

With the less than spectacular visuals and audio, the game really draws its strengths from its jackpot and bonuses. First off there is an instant win bonus awarded for landing three wild symbols anywhere on the reels. This bonus randomly pays between 2x and 5x the bet value. Then there is the scatter bonus triggered by landing three or more scatters anywhere on the reels. The scatter bonus provides the best chance for winning a great bonus, besides the jackpot of course. Once triggered the player will face a screen filled with choices. The player will need to pick one stone from each row. The first row determines the number of free spins awarded. The second row determines the value of the multiplier that will be applied. The third row hides a potential additional scatter, though there is no guarantee. This additional scatter acts as an expanding scatter for the duration of the bonus. Then for the luckiest of the lucky the fourth row provides a potential additional wild symbols to further increase the winning potential of the bonus round. The bonus round cannot be re0triggered but if the symbol of Commodus lands on reel 3, an additional 3 free spins are added to the bonus. The final bonuses is a cool 5000 coin bonus that can be won by landing 5 symbols of Commodus on an active pay line. The potential wins are very impressive.

The Gladiator Progressive pokie is not geared towards beginners. It requires a certain level of patience and determination, not to mention a fairly chunky bank roll. There are long periods with little actin and very few wins but for those who persevere and manage to crack into the free spins bonus, the winning potential is great. It is important to budget and prepare for the long string of losses that are inevitable players who are able to land bonuses will see their patience rewarded and given the potential for literally million in winnings, the incentive is definitely strong to play this game. PlayTech decided to take an already popular game and improve it with a progressive jackpot…can anyone say “Good idea”? We certainly think so.