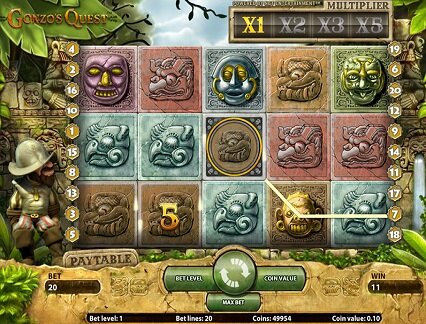 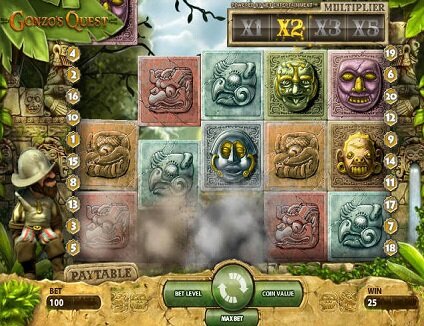 In Gonzo’s Quest, NetEntertainment presents you with a unique opportunity to join Gonzalo Pizzaro, the famous Spanish conquistador, on his quest to find the lost city of gold, Eldorado. Emerge yourself in this beautifully designed pokie game as you travel through the perilous South-American jungle in search of vast riches.

NetEntertainment, also known as NetEnt, have been in the iGaming business for over 20 years and have an arsenal of great games to show for their efforts. Gonzo’s Quest has been around for a few years already and has proven to be among the most memorable games developed by NetEnet.

Get your $750 bonus
Play now for real money

Gonzo’s Quest is a truly beautifully designed online pokie game. Upon loading the game you’ll be treated to a short intro video that builds the basis of Gonzo’s story. While travelling with his Spanish countrymen to foreign lands, Gonzo decides to abandon his crew to claim all the untold riches held in Eldorado for himself. While playing he patiently waits on the side of the screen to see how much gold you are able to win for his cause.

The game screen depicts a stunning scene in the Amazon jungle with an Incan temple in the background. There are plenty of rock carvings depicting human and animal faces, with one face spewing out water to create a tiny waterfall. The sound track include insects singing in the background to create an authentic atmosphere you should experience in a jungle and the remaining sound effects are pleasant while not becoming repetitive after long periods of play.

Reeling in The Tribal Life

The symbol design in Gonzo’s Quest is perfectly suited to accompany the ancient South-American theme employed in the game. The symbols are beautifully designed, using clearly distinguishable colours and entertaining carvings. Below you’ll find a layout of the various symbols in order of value.

Among the regular symbols there is also the Wild and Free Fall symbols. The Wild symbol displays a grey tribal craving with a gold encircled question mark while the Free Fall symbol is an all gold medallion with another tribal face carving.

This 5 reel game has 20 payout lines available and allows bets from 0.01 coins all the way to 500 for those who are feeling brave in these dangerous surroundings. Instead of spinning the reels like most pokie games, you are instead treated to an avalanche like animation where the symbol stones fall from the sky in a randomly selected order. This may sound like a small variance but it’s actually a welcome change and is one of the key features that make this game stand out from the competition.

Maximums Worthy of a Tribal Leader

It is unclear exactly how much the maximum payout is in Gonzo’s Quest but whatever it is, it’ll be won when playing with the freefall bonus which increases the maximum available multiplier to 15x. Some have reported winning up to 320 times their stake and with a max bet of up to 500 coins that could be quite the jackpot.

Gonzo supervises your entire game from the sideline and reacts with various emotions as things progress. Should you be idle for a long period of time, you’ll find him take out a roll of parchment to read while he waits. When you win however, he’ll be celebrating in various manners like performing some enthusiastic fist bumps, spin his helmet on his finger and even do a moon walk.

The falling avalanche effect implemented by the reels do more than just create great visuals. When you find a winning combination, the winning stones explode in spectacular fashion. Those empty spaces are then filled by any overlying stones and the remaining slots are subsequently filled with new symbols. Should you achieve another win with the newly placed symbols, they will once again dissipate to repeat the process. Every single spin then creates the opportunity for multiple wins. Additionally, should you receive a winning line, you’ll also receive a score multiplier. At first the multiplier changes to 2x and then to 3x and 5x if you are lucky enough to win on consecutive avalanches but resets when you have to perform a new spin.

The final bonus feature included in Gonzo’s Quest is the Free Fall bonus. You’ll find regular Free Fall symbols on your screen and you’ll unlock this bonus when you have 3 of these symbols in consecutive reels. This will grant you 10 free spins which also employ the avalanche feature like the normal game, however the multiplier is changed to 3x, 6x, 9x and 15x which dramatically increases your winning potential.

Gonzo’s Quest may not have as many bonuses as some other games available online but the pretty design and entertaining story makes this game worth at least a few minutes of your time. The game also offers an auto play function and is available on mobile platforms although some of the animations that make this game so good are not available in the mobile version. Gonzo’s Quest is a real gem in NetEnt’s vast library and it’s easy to see why it was also their first game to reach platinum status.